What Is A Virtual Telepresence Robot?

The term telepresence describes any technology which enables a person to simulate being in one location when they are in another location. This can include observing the surroundings of their virtual location, or even interacting with objects or people in that secondary location. Basic telepresence systems will include only visual and audio feedback. Frequently, this is accomplished by streaming video to the user through a static camera mounted in the secondary location. A simple form of interaction is letting the user control the direction/orientation of the camera, so they can see more of the surroundings in the remote location. Telepresence robots build off this general concept by enabling the user to control the robot and move throughout space in the remote location and interact with objects in the secondary location. Drive-able telepresence bots are robots that are set on a wheeled base and capable of movement, and telepresence robots are considered “adaptive” and distinct from more immersive yet stagnant telepresence systems.

Telepresence robots can simulate the height of a person by having the camera and display be mounted on a pole, with the camera positioned such that the device’s operator seems to actually be having eye contact with the user. While the degree of immersion for the operator is important to consider, how people interact with the operator is also an important consideration. Good telepresence robots can help make the experience less jarring. 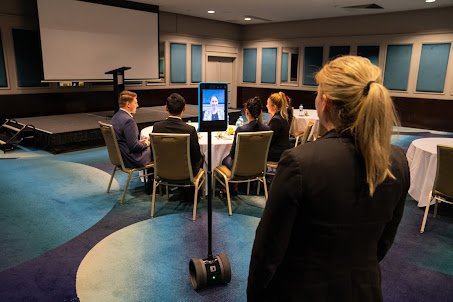 What Are The Benefits of Using Telepresence Robots?

Telepresence robots also have advantages over non-robotic telepresence systems. In contrast to a simple camera system, a robot can be controlled by the user to manipulate objects remotely, which enables functions like remotely handling the organization of items or tools. Future telepresence robots will be able to take voice commands and manoeuvre through dangerous/difficult environments thanks to improved sensors.

How Can Telepresence Robots Be Used?

What Do Telepresence Robots Cost?

Call 1300 342 546 to discuss a 30-day free trial or visit our website, www.telein.com.au/ to organise an onsite or remote demonstration of the technology!

Interested in how telepresence robots can work for you, but wondering what exactly they can be used for? Join us in 'Telepresence 101', where we...

Seven Ways To Use Your Telepresence Robot Beyond The Office

If you've been following our blogs and insights, you'll know that telepresence robots are excellent platforms for hybrid work, providing remote...

Competition for talent is heating up, and businesses will need to employ new strategies in order to attract and retain the best employees in 2022....